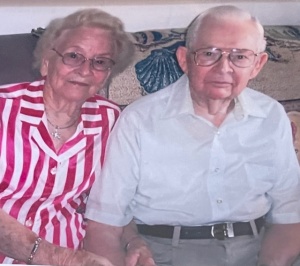 Ruby Irene Russ, 104, passed away on Sunday, July 25, 2021. She was born in Robeson County to the late Alexander W. and Mary Elizabeth (Edwards) Moore. Ruby was also preceded in death by her loving husband O.C. Russ.

Ruby is survived by her two daughters, Mary Susan Sprague and Frances McCollum and husband Mike, one grandson Roger Melton and wife Tina, and two great granddaughters, Angelina Lucas and Samantha Melton all of Fayetteville, NC.

A private family Memorial Service will be held at a later date.

It’s overwhelming to think of the changes Ruby would have seen in her 104 yrs. Here are just a few of them:

Ruby was 8 when Toasters were invented –   Too bad it took another 31 years to invent the Pop-Tart!

Ruby was still in her teens -  just in time for Suntan Lotion and Bikinis . . .

Ruby was 62 and no longer needed a map while traveling . . .

Ruby was 90 before Steve Jobs finally unveils the first iPhone . . .

To send flowers to the family or plant a tree in memory of Ruby Irene (Moore) Russ, please visit our floral store.