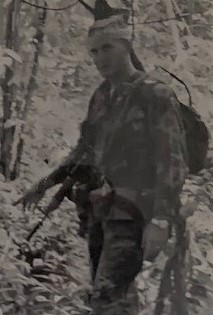 Arvill M. Hicks passed away peacefully on Sunday, May 23, 2021 at his home. He was born in Hood River Oregon in 1944 to the late Amos and Lillie (Myers) Hicks.

Sergeant Major Arvill M. Hicks joined the US Army in 1966. Arvill was a proud US Army Special Forces Veteran who served his country for over 24 years. During his career, he was honored with numerous awards including:

THE AWARD OF THE AIR MEDAL FOR HEROISM

For heroism while participating in aerial flight in the Rep. of Vietnam: Staff Sergeant Hicks distinguished himself by valorous actions on 12 May 1969 while acting as recovery NCO during the extraction of a beleaguered reconnaissance team. When it was discovered the foliage was too thick for the helicopter to set down to pick up the team, it was decided to use a rope ladder. Sergeant Hicks released the ladder, but it became entangled and would not reach the team. Oblivious to the enemy fire, Sergeant Hicks climbed down the ladder and, while completely exposed, freed the ladder enabling it to reach the men on the ground. Sergeant Hicks remained in his precarious position until he was sure all the tam members could safely reach the ladder, then he climbed to the helicopter and helped each team member into the aircraft as they reached the top of the ladder. Due to Sergeant Hicks’ fast thinking and heroic action, the team was rescued without a casualty. Sergeant Hicks’ valorous deeds ere in keeping with the highest traditions of the military service and reflect great credit upon himself, Special Forces and the US Army.

AWARD OF THE BRONZE STAR MEDAL FOR HEROISM

For heroism in connection with military operations against a hostile force: Sergeant Hicks distinguished himself by exceptionally valorous actions on 16 March 1966 during combat operations near Phuoc Vinh, Rep. of Vietnam. When an estimated Viet Cong regiment attached Sergeant Hicks’ battalion perimeter from all directions, he carried ammunition through intense hostile fire from the command post to the front line. When informed that a company had sustained many causalities and needed replacements, Sergeant Hicks immediately moved to the perimeter. After killing a sniper forward of the perimeter, he was critically wounded by a mortar barrage while returning to the perimeter. Although wounded and barely able to move, he waited nearly five hours to be evacuated, insisting that the more seriously wounded be evacuated first. Sergeant Hicks’ personal bravery and devotion to duty were in keeping with the highest traditions of the military service and reflect great credit upon himself, his unit, and the UUS Army.

Arvill was a member of the Masons and after he retired,  he was able to enjoy his favorite hobbies - hunting and fishing.

He is survived by his wife Ursula of the home; his two daughters, Kim H. Hicks of Fayetteville and Carolyn S. Sherwood of Charlotte, and his five grandchildren.

Arvill fought for his country with honor and valor. His commitment in life was honoring his country, the United States of America, his family and putting all others before himself.

SGM Hicks will be laid to rest in Arlington National Cemetery at a later date.

To send flowers to the family or plant a tree in memory of SGM Retired Arvill M. Hicks, please visit our floral store.

Services are to be announced