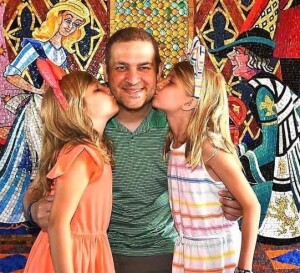 Tysun grew up in Maine before earning his electrical engineering degree from Clarkson University in Potsdam, NY. After graduation he was offered a job at the VA Hospital in Fayetteville where he worked for 18 yrs.  He met the love of his life, Carrie, and they married in 2007.  They had 2 beautiful girls Lily and Grace and a son, Watson, who departed this Earth way too soon in 2015.

Many know Tysun as a very kind and very quiet man but those close to him knew how incredibly funny he was. Tysun loved all animals, good food, roller coasters, sports, the outdoors and anything to do with technology but his family was always his main priority.  This became even more evident as he fought through SO much cancer pain over the years because he never wanted to leave his wife and girls.

Tysun was so good at every role he filled, from husband to father, son to sibling, son in law to brother-in-law. Even at the end of his life as he fought cancer he pushed through the pain to celebrate birthdays and holidays and never gave up trying to extend his life.

Tysun is survived by his wife Carrie and his two daughters Lily and Grace of the home; his father Larry and mother Susan Dostie of Fuquay Varina, NC; sister Rachelle Dostie of San Diego, CA; brother Berek Dostie of Richmond, VA; several nieces and one nephew.

A private service at the request of Tysun will be held at a later date. Above all else, Tysun would love you to honor him by spending time with your family and friends and eating something delicious.

To send flowers to the family or plant a tree in memory of Tysun Joshua Dostie, please visit our floral store.

A Memorial Tree was planted for Tysun Joshua

Join in honoring their life - plant a memorial tree