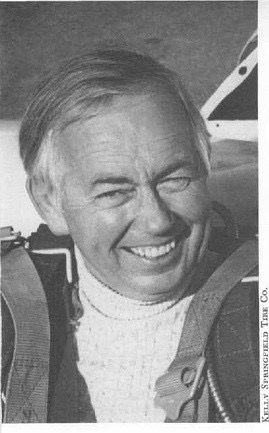 William Covington Holbrook, Jr. was born in Akron, Ohio on August 23, 1921. He died on June 8, 2020 in the North Carolina Veterans Home in Fayetteville, North Carolina at the age of 98.

As a member of the U.S. Army Air Corps, Bill flew air sea rescue missions in the South Pacific during World War II. After the war, he worked as a corporate pilot for Goodyear and its subsidiary Kelly Springfield. Bill was passionate about flying, especially flying sailplanes. He set a world record for soaring in 1972 with a non-stop round trip flight from State College, PA to southwestern Virginia, a distance of over 783 miles. In 1974, he won a cross-country sailplane race competing with six other pilots flying from Los Angeles, CA to Washington, DC. Bill was a Presbyterian and served as a church elder in Cumberland, MD and Tucson, AZ. This year marked Bill's 75th anniversary as a Master Mason.

Bill loved his family as much as he loved flying. He married Sophie Relich, high school sweetheart in 1942. She passed away in 2014, a couple of months after their 72nd wedding anniversary. Together, they raised four daughters, Karen Holbrook (Richard Trask), Billie Holbrook, Deborah McCullough (Ed), and Lisa Lofthouse (Dean). Bill loved children, especially little ones and was an important figure in the lives of his six grandchildren and seven great-grandchildren. He was the patriarch of a large extended family. Many family members recall their first airplane or glider ride at the Cumberland Airport.

A Celebration of Life Service will be held at a later date.

To send flowers to the family or plant a tree in memory of William Covington Holbrook, Jr., please visit our floral store.

You can still show your support by sending flowers directly to the family, or by planting a memorial tree in the memory of William Covington Holbrook, Jr.
Share a memory
© 2020 Fayetteville Cremation Services. All Rights Reserved. Funeral Home website by CFS & TA